Tributes are being paid to Samuel Akwasi, a young footballer from Nottingham who died following a match on Saturday.

The 13-year-old passed away in hospital after suffering a cardiac arrest on the pitchWitnesses said the young footballer, who was playing for his club FC Cavaliers under-13s, collapsed during a game on Saturday at around midday.

The game, that had been taking place on one of the grass pitches at the Forest Recreation Ground, was abandoned.

Dvarne Edwards, a sports assistant at the Forest Sports Zone, said he “ran over straight away” after he saw the boy collapse on the grass.

Mr Edwards explained the boy received treatment and that an ambulance arrived within minutes.Samuel was reportedly taken to the Queen’s Medical Centre where he later died. People across the city have paid tribute, describing the teenager’s passing as a “loss to Nottingham”, sending their condolences to family and friends.

Jason Cross, FC Cavaliers U12’s manager paid tribute saying: “Sam was just an amazing kid, he was just such a leader in his team, everybody loved him.”

The headteacher at The Trinity School, Aspley, Nottingham, where Samuel attended school has paid tribute, he said: “Samuel was a gift to our school community and we are so deeply grateful for the privilege of having him with us.

“For those who knew Samuel, he was a kind, friendly and very popular young man. Samuel was a talented sportsman who loved life, he enjoyed school and was known for his huge and endearing smile.”

There will be a minute’s applause at Notts County Women FC’s match tonight, to ‘honour the lives’ of Samuel Akwasi of FC Cavaliers and Jamie Brough of Sports Gateway. 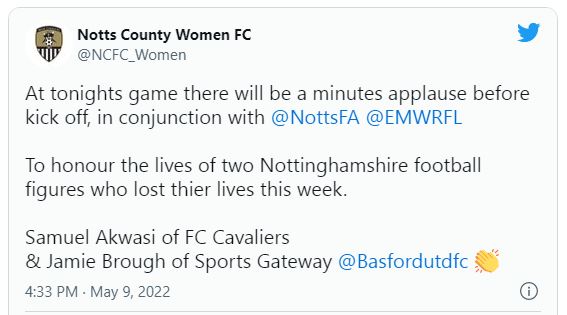 Kushal Sood, a lawyer in Wollaton, said: “It is massively important to understand why these freak incidents happen. It was a similar incident last year.”

The 40-year-old added: “I think everyone wants to know what happened and put an end to this circle – especially when it is a child who died. These teenagers are children. A child’s death is the saddest thing. We have got children of our own so it is easier to relate to this.

“But now it is a time for sadness, not explanations. I hope his family get the closure they are seeking.

In a statement released through the Nottinghamshire FA, a spokesman for the club described Samuel as “very well respected by all his team members”.

They added: “Nottinghamshire FA is saddened to inform you that following a medical emergency during a youth game yesterday, 13-year-old Samuel a player for FC Cavaliers has passed away.

“We send our condolences to Samuel’s friends, family and team mates at this extremely difficult time.”

Confirming details of the incident, a spokesman for the Young Elizabethan Football League said on Facebook: “We are devastated to have to report the tragic events that unfolded yesterday morning during a YEL U13 game between FC Cavaliers and West Bridgford Rossoneri.

“A young Cavaliers player, Samuel Akwasi, collapsed on the pitch after suffering a sudden cardiac arrest.

“Despite the best efforts of those present and the quick application of a defibrillator along with the speedy response of the emergency services, Samuel sadly passed away in the QMC.

“On behalf of the YEL and our football community, our hearts and prayers all go out to his family and friends as well as FC Cavaliers at this awful time.”It is the second time in less than a year that a young footballer has died following a medical emergency on the pitch.

West Bridgford Colts star Dylan Rich died at the age of 17 after an emergency during an FA Youth Game last September. 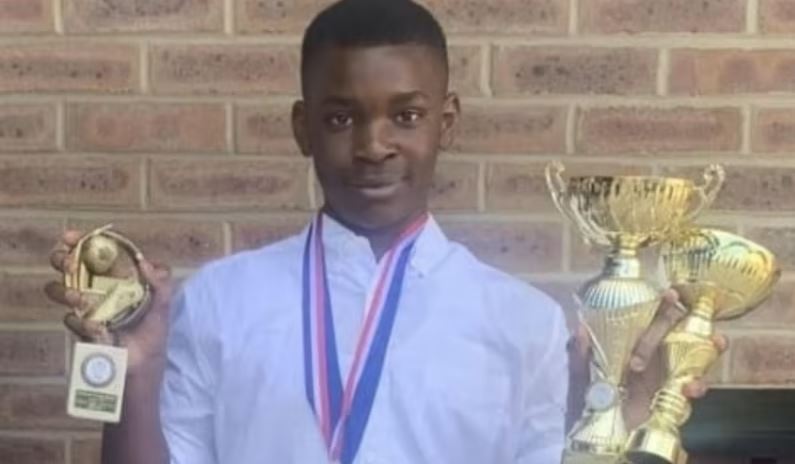 PrevPreviousUnder the Excuse of a “Pandemic” Government’s Gotten Away With Things That People Would Have Overthrown Them for Before. Here’s a Reminder of Just a Few of the Firsts We’ve Seen Over the Past Two Years
NextBill Branch: 70-Year-Old Tennessee Painter Tells the Non-vaxxinated “Get the Vaxxine, Not Dewormer,” Died 10 Weeks After Moderna mRNA Booster InjectionNext We Are Accelerating the WHO Pandemic Treaty Senator Rand Paul Will Block $40 Billion in Aid to Ukraine